Our Lady of the Hermits 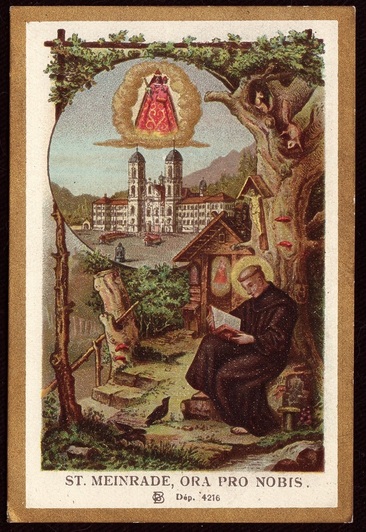 O God, you are the giver of all good things and make our community glorious in the veneration of the Virgin Mary. In your kindness hear your servants who humbly seek this shrine, and safeguard them always in your unceasing vigilance. Through Jesus Christ....

The origin of the celebrated pilgrimage of Our Lady of the Hermits, the Loretto of Helvetia, goes back to the heroic times of Charlemagne. The saint who first inhabited the hermitage of Einsiedeln, was a young lord of Suabia, named Meinrad, belonging to the illustrious family of the counts of Hohenzollern.

Gifted with that genius of reverie which still forms the prominent feature of the German character, Meinrad, when scarcely arrived at adolescence, loved to buy himself in the thickest parts of the woods, which then covered his country, and to entertain himself alone with God, by the sound of bubbling springs, flowing beneath the shade of oaks.

Oftentimes night overtook Meinrad attentively reading the Scriptures in an old book with golden clasps, which he had inherited from his fathers, or meditating profoundly on the miracles and benefits of the Blessed Virgin. His soul was elevated in solitude; taking pity on the world and its worthless goods, Meinrad made his vows in the Abbey of Richenau, which he quitted afterwards to settle in a small hermitage built on the top of Mount Etzel.

Meinrad spent seven years there; but the good odor of his virtues descended to the depths of the valleys; the shepherd and woodmen came to him, then the great lords, then the noble ladies, humbly to solicit his prayers and counsels. These acts of homage were a torment to the young hermit, who loved nothing but contemplative prayer and the peace of the woods; one night he secretly left his hermitage, carrying with him, as his sole possession, the statue of the Blessed Virgin, Our Lady of the Hermits, the only ornament of his chapel, and took refuge in a forest of the canton of Schwytz, which bore the characteristic name of the Dark Forest.

Thirty-two years afterwards, Meinrad was assassinated by some wicked men, with whom he had shared the water from his fountain and the wild fruits of the forest; the birds of heaven pursued the murderers, who underwent the chastisement which their crime deserved. (They were betrayed by two ravens, who harassed them incessantly as far as Zurich; they even made their way through the windows of the inn which the assassins had entered, and did not leave them until they had been punished.)

After the tragic death of Meinrad, his cell, where miracles were wrought, was uninhabited for almost half a century. At the end of that time, a small society of hermits came and settled there under the care of Saint Benno, of the ducal house of Burgundy. Hence the surname of Our Lady of the Hermits, which was given to the chapel of Einsiedeln.

Saint Eberhard devoted his possessions, which were considerable, to building a monastery in this place, of which he was the first abbot.

The chapel of the Blessed Virgin, as it was in the time of Saint Benno, was placed in the great church of the convent, of which Saint Meinrad’s cell formed the choir; the French destroyed this chapel, which had resisted the furious attempts of Protestantism; but God permitted that the miraculous statue of the Blessed Virgin should be saved in time. It was replaced in the church of Einsiedeln in 1803, with great solemnity, and in 1817 it recovered part of its ancient magnificence, thanks to the influx of the most distinguished artists, and the abundant alms of the faithful. The statue is thus also known as Our Lady of Einsiedeln. (*from Life of the Blessed Virgin Mary, with the History of Devotion to Her by Mathieu Orsini, translated from the French.) 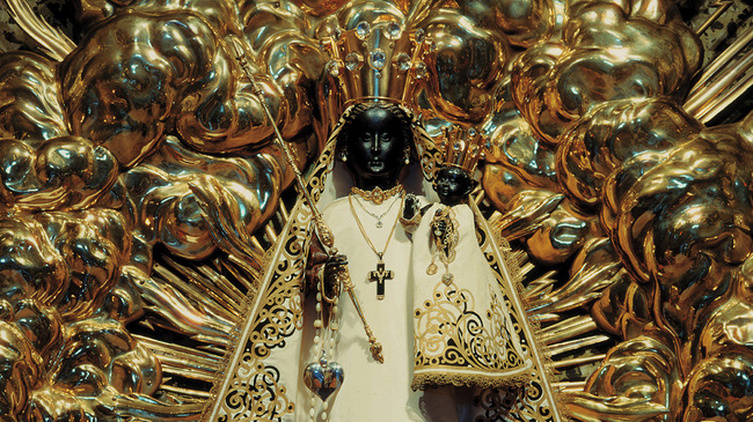